Crank it? Or Spank it?

As a child of the original MTV age, I remember when there were music videos and a VJ (Video Jockey) coined “Crank it” over a newly released video.  All of the viewers instantly feel in with the newly coined term, which lead to an interactive TV show on MTV where videos were played and the viewer could call to vote on whether to “crank it” or “spank it”.  Crank it, meant that you loved it and wanted more… Spank it, well you get the idea.

Today, you turn on MTV and there isn’t much music on that channel.  If you want a music, defer yourself to Google or its subsidiary YouTube.  Even though this channel has lost its identity in the daily grind and in the modern culture, music will never lose its place with the human mind, soul or heart.

BBC – Why does music evoke memories?

Music stimulates memories for a lot of people.  Certain songs can transport me to different times in my lives and and places, places being where I was in my life journey.  Some songs make me smile, some make me cry and some make me feel like I can take over the world or do anything.

The human mind is a very complex and as much as it has been studied about it, there is still a lot of unknowns.  The article “Why does music evoke memories” published by Tiffany Jenkins in October 2014 covers the work of David C. Rubin in his book “Memory in Oral Traditions”.  It discusses how the areas of the brain and how they are involved when it comes to oral memory.  Music helps to bring back memories by offering rhythms to help retrieve memories.

“A large part of memory takes place in the unconscious mind” Robert Snyder, a composer and chair of the sound programme at the Art Institute of Chicago, tells me. “There are aspects of memory that are remembered implicity, that is, outside of consciousness”. What’s more, he says, “implicit memory systems involve different parts of the brain than explicit memory systems”. It is the explicit memory systems that are damaged by conditions such as Alzheimer’s disease. Implicit systems are robust in comparison. Snyder explains that “things that can affect us from outside of consciousness are often regarded as powerful”. In other words, implicit memory is emotional as well as durable. – Tiffany Jenkins, Why does music evoke memories?, 2014

Music helps make powerful memories.  This is why some songs will make you smile, some cry or some help you break through that emotional wall that you feel trapped behind.   Sometimes the most simple of songs can help you find your way through.

Shamanism is a practice that involves a practitioner reaching altered states of consciousness in order to perceive and interact with what they believe to be a spirit world and channel these transcendental energies into this world.[1]Shamanism – wiki

There are many ethnic groups across the globe that have religions that involve Shamans.  Shamans are respected in these cultures, but live away from the populous.  They live away from people, because they are considered to be empathetic sensitives, which means that they can sense and feel the emotions of the others around them.

Shamans gain knowledge and the power to heal by entering the spiritual world or dimension.  This travel is accomplished by some with the use of music.

Shaman’s Way – All About Journeys

The website Shaman’s Way  discusses the world of the Shaman and how they go through the journey.   The key to a successful journey is music.

Music is used to help the Shaman to enter the trance required to travel to the other world and to help bring them back to this world.  If music is strong enough to help a soul transcend into another realm and back, then it’s strong enough to carry you through your own journey.

Dust off those records

Modern musicians have helped bring back vinyl.  Jack White released an album called Lazertto on vinyl only to begin with.  Other artists soon followed with vinyl releases.  Now, older albums are being digitally remastered and re-released on vinyl.

Amazon and eBay offer sales of classic albums on the original vinyl to purchase, plus the release of modern record players now gives people the ability to make their vinyl records digital.   This technology has allowed me to travel back to childhood memories of listening to my mother’s Alabama record and her Fiddler on the Roof soundtrack.   Happy memories of playing old Disney records she brought back from Disneyland when she went as a child.  Plus, the memories of the books on record I had as a kid.

I have gotten some newer records from newer artists and have found the experience to be phenomenal.  So, if you have some old records… dust them off and play them again.  Take a chance and take a journey. 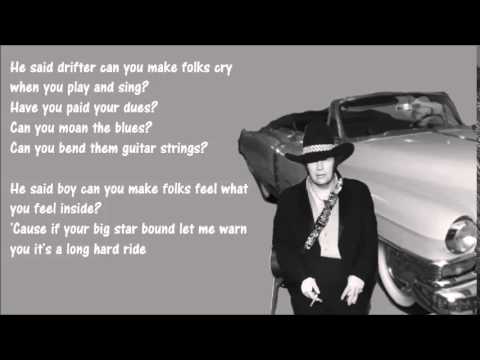 The song is about a young country singer starting on his journey from Alabama to Nashville.  The young man is thumbing for a ride when a mysterious antique Cadillac.  The man tells him that it’s a long walk to Nashville and asks if he would like a ride.  The young man enters the car and begins his journey and gets the best advice a young country music singer could ever ask for from one of the greatest singers in country music history, Hank Williams.

To listen to the song: DAVID ALLAN COE ( The Ride ) – Live Recording